As I've said elsewhere, my wife shoots - a lot better than I do. Which isn't too surprising; women are generally very good shots.

A few weekends back we were at Wade's Guns in Bellevue so that Amy could shoot her NRA Handgun Qualifications for Marksman. She's working her way up to the higher levels as time permits.

The Marksman qualification is pretty easy: the requirement is to get ten rounds in a 6-inch circle¹ at fifteen feet, and you must shoot ten targets successfully. You can try as many times as you need to to get the ten good targets.

Since we normally shoot at an eight-inch bullseye at 25 yards (75 feet) Amy didn't feel this would be too challenging.

The qualification program calls for 9-inch paper plates as targets, but we thought that was rather silly, so we googled up a bullseye target on a 1" grid with a grey ring at six inches and a two-inch red bullseye that was just perfect, and printed up twenty (I figured she might mess some up, so extras would be a good idea...)

Of the 100 rounds she fired that day, four were outside the two-inch bullseye. 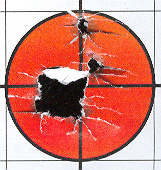 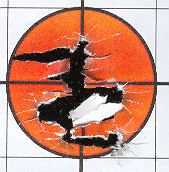 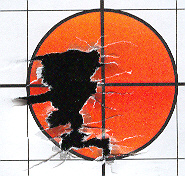 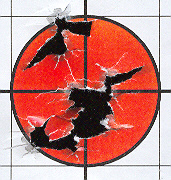 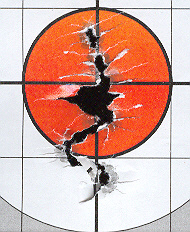 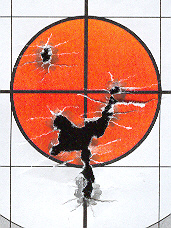 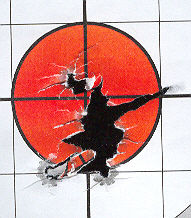 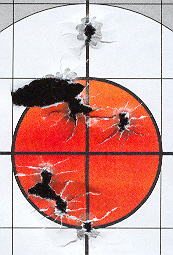 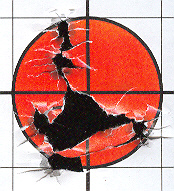 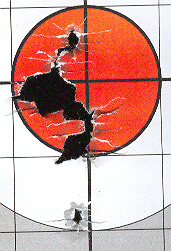 I am so proud of her! {wipes tear}

What was quite amusing for me was the people on the lanes around us were all shooting roughly the same range (15-20 feet) and small calibers (.22, 9mm) and couldn't seem to get their groups tighter than about a foot in diameter... I couldn't help but wonder what they were thinking of this chick firing a .45 and consistently making holes about the size of a silver dollar in her targets.

Next up: Marksman First Class. We'll be going to another indoor range that's closer (and less expensive) than Wade's. I am confident Amy's going to ace that qualification as well...